re:Invent is a huge re-affirmation of Amazon's ambitions of making corporate datacenters redundant. re:Invent has always showcased the latest and greatest product innovation. In the 2016 edition of re:Invent, AWS announced more than fifty new services and features. Here's a quick recap of key product releases in the previous four editions: 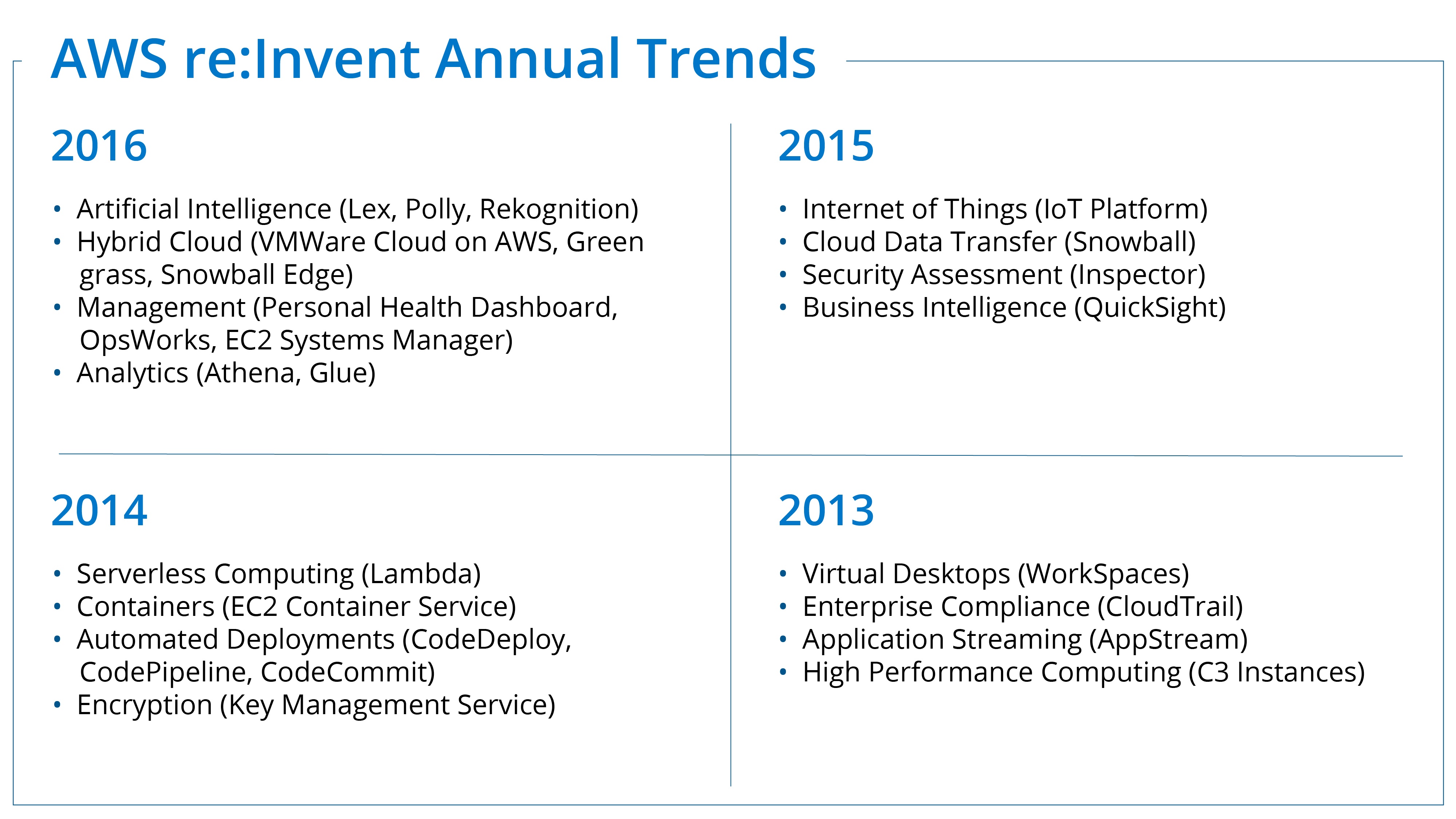 We sat down with cloud expert, MSV Janakiram to understand which products AWS will launch at this year's re:Invent. Here are Janakiram’s top five things to watch out for at re:Invent 2017:

AWS might add native container monitoring capabilities to CloudWatch for microservices level monitoring. Using CloudWatch, customers will be able to track the health of their entire AWS stack, from virtual machines to applications.

AIOps is the ability to bring algorithmic intelligence to IT operations management. Gartner expects 40% of enterprises will use AIOps technologies to replace traditional monitoring and IT operations tools.

CloudWatch is a dumb monitoring interface today. CloudWatch aggregates AWS resources data and displays metrics using dashboards. With the infusion of AI capabilities, CloudWatch logs will become the single source of truth for anomaly detection and root cause analysis. CloudWatch will be able to predict if your EC2 server is showing signs of disruption and then migrate your workloads to a healthier EC2 instance.

One pain point in building Lambda services is the process of writing and deploying them. You need to invest a lot of time and effort to get a Lambda service up and running. AWS will make it easier to write Lambda functions with Integrated Development Environments (IDEs). In 2016, AWS acquired Cloud9, which offers a popular browser-based IDE for 40+ languages. AWS might offer a Cloud9 IDE for Lambda so that you can write Lambda code and deploy it at a click. Enhanced Lambda tooling will make it easier to develop and deploy serverless applications.

Serverless computing is mostly event driven. Serverless requests get triggered by external events from a DynamoDB, IoT, or an API gateway. There are quite a few use cases that demand running Lambda code snippets for longer jobs. AWS might announce support for Lambda instances that support persistent tasks.

04. AWS Will Aim For Competitive Parity On Their IoT Platform

Although Amazon was an early player in the IoT market, it hasn't done a whole lot to enhance its IoT platform. There's a lot of plumbing needed to integrate machine learning with the IoT platform. Robust machine learning integrations for IoT can detect anomalies and perform predictive maintenance for managed devices.

05. Run All Your Data In The AWS Cloud

Google’s Cloud Spanner and Microsoft’s Azure Cosmos DB are examples of globally consistent databases at scale. Amazon Aurora might add global capabilities for a consistent, relational database service. You’ll be able to add a record in Tokyo and read it in Sao Paulo in milliseconds, enabling a unified and up-to-date view.

Traditional databases like RDS and DynamoDB don’t quite support IoT use cases. IoT is all about sensors and sensors emit data on a time stamped frequency. Expect AWS to offer a new time series database or an upgrade to DynamoDB. Time stamps will be the primary index for querying, processing, and analyzing data, which aligns well with IoT needs.

Data lakes help store data in its proprietary native format. AWS has relied on third parties for data lake capabilities on its infrastructure. AWS might announce a native data lake powered by S3, RedShift, and all its storage investments.

Share your forecasts, opinions, and product wish list for AWS re:Invent on our Twitter handle. If you’re looking for more re:Invent insights, listen to our interactive discussion with MSV Janakiram.